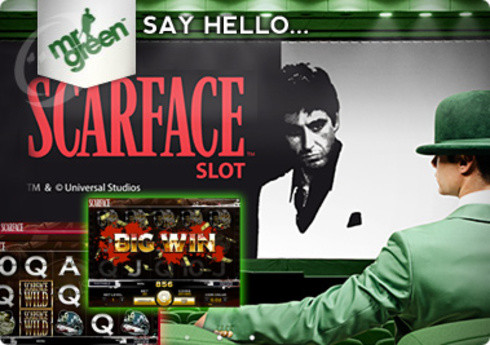 Casino software giant, Net Entertainment launched its branded video slot game, Scarface in 2012 as a five reel, 20 pay line game with lots of bonus features.  Net Ent teamed with Universal Studios to create a slot game based on the 1983 gangster-themed blockbuster by the same name, and the casino game has incorporated many of the most memorable moments from the film through cut scenes on the reels.

Meet famous Scarface characters on the reels of this game, including Tony Montana (played by Al Pacino in the cult movie), Elvira, Chi Chi and Manny.  Other symbols are all gangster related, including weapons and cash.  Net Ent has done a very good job of capturing the essence of the film.

The Scarface wild acts as the regular wild in this game and it substitutes for other symbols to form winning combinations on the reels.

Scarface slot also boasts three stacked wild symbols (Tony, Elvira and Manny), who land on three different reels, each with a unique function.  Landing on reel two will trigger the Nudge feature, on line three will trigger the Say Hello to My Little Friend bonus game, while a stacked wild on reel four triggers free spins.

Should a wild symbol land on reel two, the activated Nudge feature bumps symbols downwards and allowsfor a re-spin to increase your chances of winning.

If the stacked wild symbol lands on reel three, the Say Hello To My Little Friend bonus game is triggered, and players need to help Scarface wager war against his enemies using weapons on hand.  Credits are awarded based on how many of these enemies Tony manages to kill in this action packed bonus game.

The third stacked wild appears on reel four and activates the 14 free spins with a 3 x multiplier.  A cool feature of this bonus game is that fact that it is played out in the iconic Babylon Night Club that appeared in the original movie, and you’ll love the flashing neon lights, disco music and, of course, the rewards.  Earn more credits by landing the Nudge feature during the Free Spins.

Coin sizes in Scarface slots range from 1c to 50c, with the chance to wager up to 100 coins per spin.  Landing five Tony Montana symbols on the reel pays out the highest jackpot of 2,000 coins.